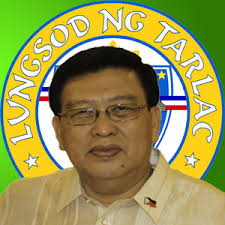 Mayor Ace’s  youthful days  were  never  sunshine and roses, rather at a tender age he had felt the stings  and adversities of an  unkind life. But he persevered  to reach for his star.

From the start he knew that he was born for a noble purpose, but in so young an age, he could not as yet  decipher what  Providence  had for him.  And this is what  he was searching for, until he  finally was able to discover  the  mission entrusted him,to serve.

Born on December 23, 1953 in Gerona, Tarlac, of impoverished parents, Isidro Manalang  and Marina Roman,  and humble beginnings,  he made a self-imposed obligation to help and support his family,  to the extent  of sacrificing his  dreams and  aspirations.  Though  it  was too difficult for him to receive formal education during his youthful age, still he managed to  attend school  and  graduated  valedictorian  in the elementary level. He was an ambitious boy and he wanted to reach for the star,  and again,  he must look for a source of income to support his studies, while supporting his family. He became a balut vendor, hanging on buses, unconcerned of mishaps that may befall him, just to  earn something to buy  food for his family  and to save some for his secondary education.  He worked for a rich relative  as an errand boy and  did all  the  chores  in the house,  and upon noticing his desire to pursue his studies,  this  relative  allowed him and supported him to get a secondary and tertiary education. But  being a mere  domestic worker  was not his  dream and  aspiration, he wanted  to  conquer poverty  and  embark  to a new  world.  He began  vending fish, traveling from all corners of Luzon, sleeping in  delivery  trucks, carrying  heavy loads of smelly fish which stick to his body and  retailing them in public markets.

But being a naturally affectionate person,  his world did not only revolve on how he could rise up from his financial distress, he yielded to the call and weakness of his heart and  fell in love and married Bonifacia Mañalac.  His wedding  was  a very romantic and most memorable day, and  he vowed to make his wife the happiest woman in the world.  Together they  worked for their family’s future and they began  expanding their fish dealership business. After 2  miscarriages,   Allan,  was born to the couple,   who gave them all the happiness a couple could  ever have.

After a few years in the business he was able to  overcome the difficulties  of his past life and  lived comfortably well. Because of his  love for  youth concerns, he  began forming youth organizations to serve the community. One of these was the Tarlac Youth Alliance, where the members were officers of  local  youth groups in their respective communities. He felt  very  ecstatic  and  gratified about the outcome of this service, and  he  decided to go on, until everyone was  pushing him to public service for they have seen a most capable leader in his person.  He started  his government service from the barangay level, as barangay councilor, then barangay chairman, on to the municipal level as councilor  and ultimately, he became the first City Mayor of Tarlac. His accomplishments as  the Chief Executive of Tarlac  City are   beyond  compare.  Foremost of them all, is the conversion of the Municipality of  Tarlac into a Component City. He takes pride that this is the most significant achievement  he could ever have in his entire life. It cost him   sweat, blood and tears,  despair, bitterness and  heartaches.

And if  one wishes to  sit down with him and  ask him to relate how he was able to have the  Charter of Tarlac City approved, by then Former Pres. Fidel V. Ramos,  he only has to ask him and he  will never tire talking  about  it.

Having completed his third and final term as mayor of the city of Tarlac, he was  urged to run for governor in 2001 and for city mayor in the May  2004 elections by his friends and constituents.  But due to some stroke of  misfortune he lost   both as per COMELEC counts and tabulations, but in the hearts of his friends  and  loyal constituents, he will forever be a winner.

And after all said and done,  we hear  him say,  “I have no regrets for not making it at  the  May 2001 and the May 2004 elections.   I know this is but  part of the  hurdles in  life and a test of   endurance at that, and I will endure as long as you are here for me.   It is sincere  service,  determination and integrity,  not strength and power,  that makes  a man. I can still serve mykabalens though I am not in  the government  service.”

Then on that fateful day,  March 3, 2005,   City Councilor Abelardo Ladera, met his untimely demise,  creating  a vacancy at the City Council. By party rules and procedures, Mayor Ace  was nominated and  appointed  as the replacement of the late councilor on May 11, 2005.  Service always finds its way.

Having emerged winner  in  the  2010 elections,  as City Mayor,  he is now continuing  all the programs he wanted to accomplish  since he assumed office in 1992.

Named   “Father of Tarlac Cityhood”, he being the  only mayor who succeeded  in  working for the cityhood of Tarlac, despite so many attempts by previous municipal mayors.
Powered by